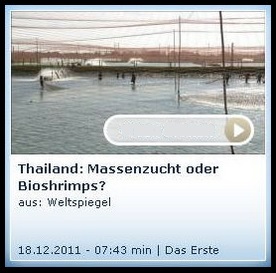 Shrimps - früher war das mal eine kostbare Delikatesse. Heute sind die Garnelen zum billigen Fastfood-Artikel verkommen, massenhaft zu finden in den Tiefkühlfächern fast aller bekannten Discounter. [ardmediathek.de] Verweis nicht mehr aktuell; 11.11.2019
16.11.2011
Newsflash: Hope for damaged mangroves
Australia/New South Wales: These mangroves near Prospect Bridge at North Creek in Ballina might look dead, but there is still hope for these tough little plants.
WetlandCare Australia program leader Cassie Price said the mangroves were stripped bare by the huge hail storm that hit Ballina at the end of September. ... northernstar.com.au
15.11.2011
Newsflash: Study identifies area-specific mangroves to plant area-specific species
India/Pune: Mangroves along the Konkan vary significantly from north to south - some species are restricted to Ratnagiri and Sindhudurg, while some belong to Thane and Raigad districts, a research on the ecological and palaeoecological aspects of mangroves along a 720km stretch of the Maharashtra coast by the College of Engineering, Pune and city-based Agharkar Research Institute, has found. ... timesofindia.indiatimes.com
14.11.2011
Newsflash: [WWF] Fears Backlash On Rufiji Delta Mangrove Forest Initiative
Tanzania/Dar es Salaam: Torching of paddy rice farm huts and felling of coconut trees in the Rufiji Delta mangrove forest reserve, carried out recently by Mangrove Management Project, may affect future prospects for community forestry management targeting the global carbon trading market. ... allafrica.com
14.11.2011
Newsflash: How green is my valley
India/Kochi: There has been a constant demand from environmentalists all over to initiate measures to conserve mangroves that are essential for controlling soil erosion and to reclaim land from sea. But precious little has been done to protect this ecosystem that has enormous environmental advantages.
Which is why,14-year-old Sanoj KS’s initiative in this regard is so praise-worthy. This student of Cherukkunnu Higher secondary school has been setting a model for others by planting mangrove seeds in the banks of Muttil river since the past two years. ... ibnlive.in.com (Update: 11.11.2019)
14.11.2011
Newsflash: Maiden’s dream turns islet into mangrove park
Philippines/Calatagan/Batangas: It started as a young woman’s dream of a pristine coastline with lush mangrove trees in her town.
The dream of youth leader Hannah Esguerra has become reality and a source of pride for the residents of Calatagan, who are now fiercely protective of their mangrove forest.
It had never occurred to many of the town’s residents that mangroves could not only shield them from natural disasters but also give them additional income. ... inquirer.net
14.11.2011
Newsflash: 'Father of Mangroves' fights for Pakistan's forests
Pakistan: It was a brutal kidnapping that turned him into an eco-warrior, and 27 years later Pakistan's "Father of the Mangroves" still lets nothing get in the way of fighting against timber "mafia" and deforestation.
"This is my life. I am very happy with it. The cause is worth living such a life," Tahir Qureshi told news agency, walking around the sanctuary that he set up in his spare time when he still worked full-time with the forestry commission. ... emirates247.com
08.11.2011
Newsflash: Cash could alter mangrove plan
New Zealand/Mangawhai/Northland: The prospect of receiving up to $30,000 in funding may see the Mangawhai Harbour Restoration Society swallow its pride and replace its original plan to strip the harbour of mangroves with a scaled-down programme.
The societyhad applied for resource consent for the staged and phased destruction of 87ha of the salt-water trees. After a four-day hearing before independent commissioners last April, the application was declined. ... northernadvocate.co.nz
06.11.2011
Newsflash: Mangrove-cutting case highlights Florida's tree of life
USA: When it came to naming Florida's state tree, the spind­ly mangrove lost out to the stately sabal palm. Nor have developers and waterfront property owners, as evidenced by a Jupiter case, shown much love for the shore-hugging view-blocker whose wetlands often smell like rotten eggs.
But the mangrove, known as the "walking tree" for its roots' leg-like looks, is as essential to South Florida as sun, sand and snowbirds. Without mangroves, Florida shores would erode, exotic birds would die, the multibillion-dollar sport fishing industry would collapse, water would become more polluted and sea levels rising because of climate change would more easily flood the coast, according to scientists, conservationists, anglers and bird-watchers. ... palmbeachpost.com
Peri-Life.de